I’m not the most artistic person in the world, and I’ve never been too great at remembering different artists, methods, or artistic periods… it just really isn’t my thing. But, of course, there are a few artists who stick out in my mind and have caught my attention. One of them is Gaudi, the designer of the beautiful Sagrada Familia. Another is Salvador Dalí… I mean, whose attention hasn’t been caught at some point in their lives by his melting clocks or infamous upturned mustache? 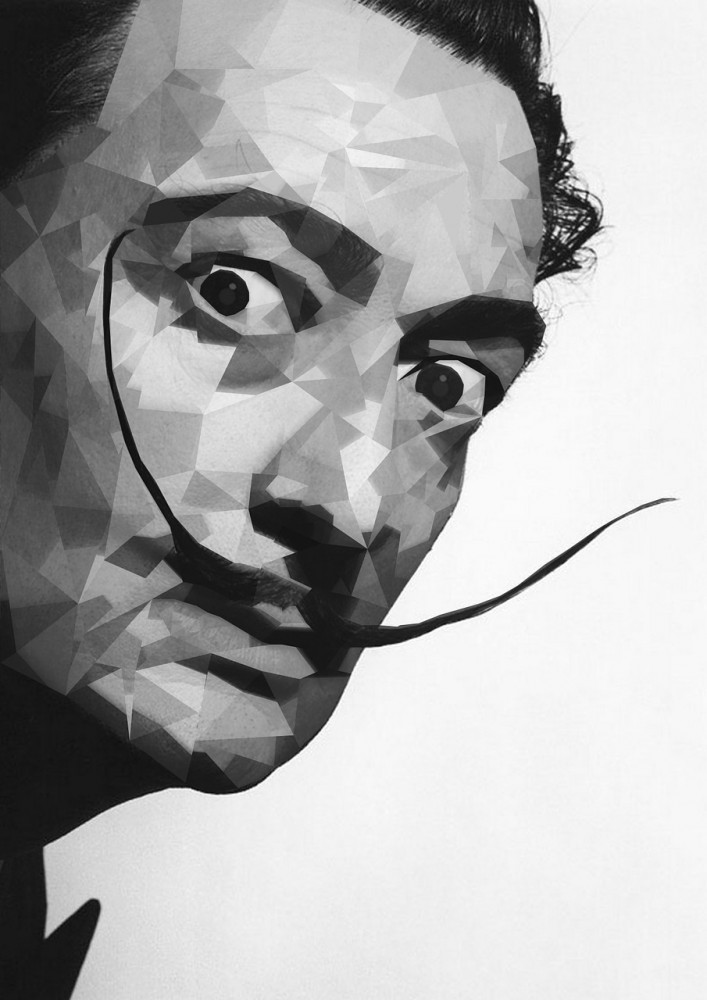 I’d been dying to go to the Dali Theatre-Museum ever since I arrived in Barcelona, but I didn’t have the chance until the end of my first year here. It is located in the very northern tip of Catalonia, about an hour and a half drive from where I was living. I could have taken the train, but surprisingly not many people I knew seemed all too interested and I didn’t feel like making the trek on my own. Luckily for me, my second host family decided to take me on a trip up there… and my first host family tagged along too! It was a nice reunion.

Figueres is a small city, known mostly for this museum and not much else. When I visited the museum, I didn’t really have the freedom to go and explore as I would’ve liked, but I was able to return the following year to explore a little bit. It is quaint and cute, with some nice bars and restaurants. I would recommend trying to spend at least a day or two there exploring! Preferably not just as a day trip from Barcelona city, but also to explore nearby cities along the Costa Brava. 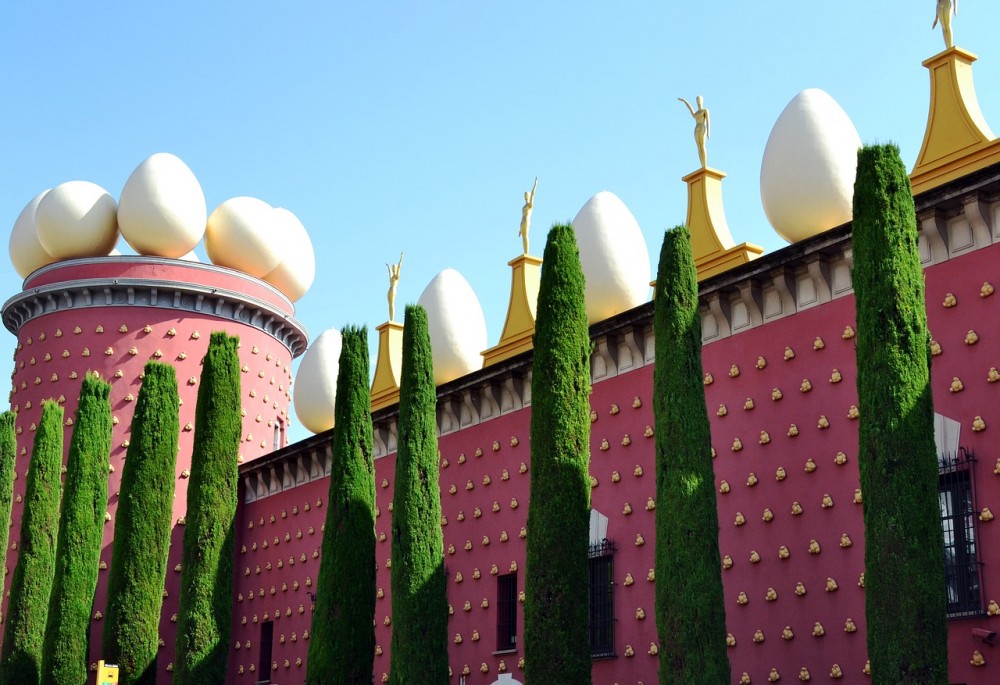 When you approach the museum, you recognize it immediately, even if you haven’t seen pictures. There are giant eggs on the top of the walls, and in some parts golden mannequins that look like the Oscars (you know, like an Academy Award?). Along the side of the red walls are large piles of what appears to be dough… super strange. But what else can you expect from Dali? 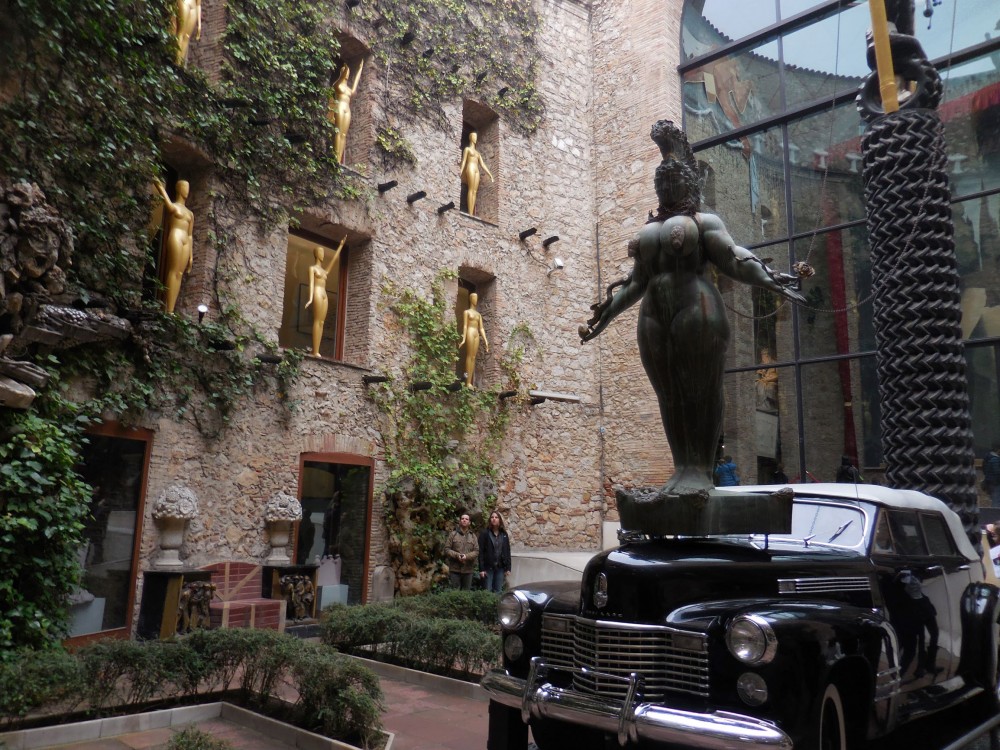 You enter the museum and almost immediately are ushered into the large courtyard. There’s an old black car in the middle with a large, naked woman standing on the hood. There’s something strange covering her nipples, I couldn’t tell what… Behind her is a large tower of what appears to be tires, and then at the very top there is a small boat with an even smaller umbrella hanging off the top, and large drops of water dripping down. Along the walls of the courtyard are alcoves that house golden mannequins with their arms in different positions. If you see pictures of it at night, it reminds me of the Red Light District in Amsterdam, with the women on display in the windows. I don’t know if that’s the look he was going for, though. No one will ever know…! 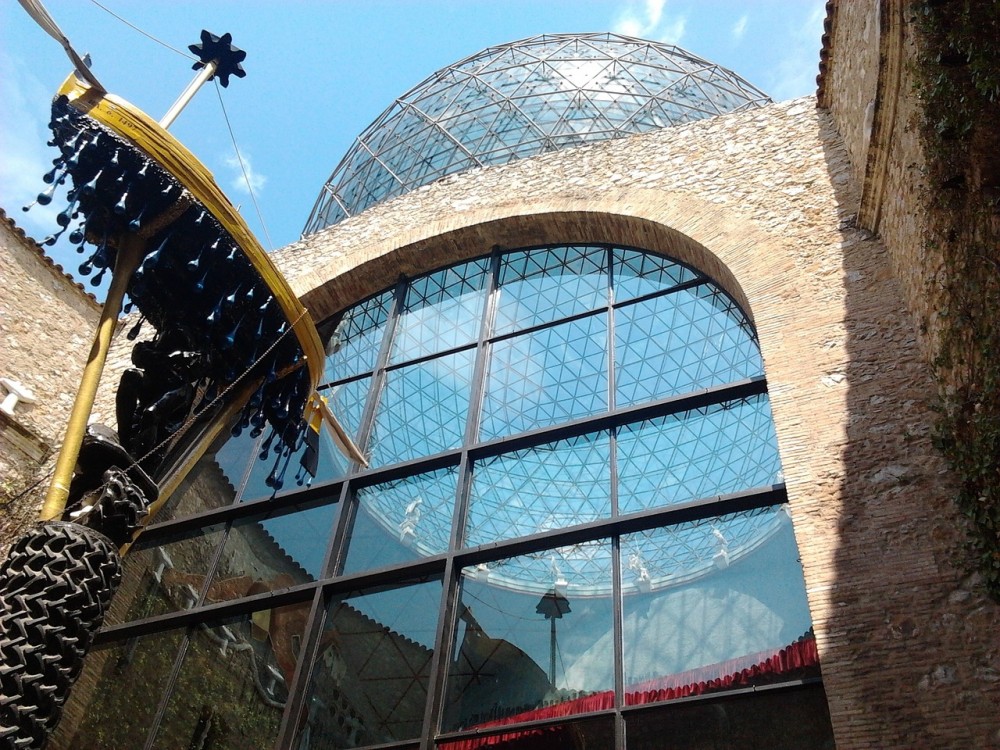 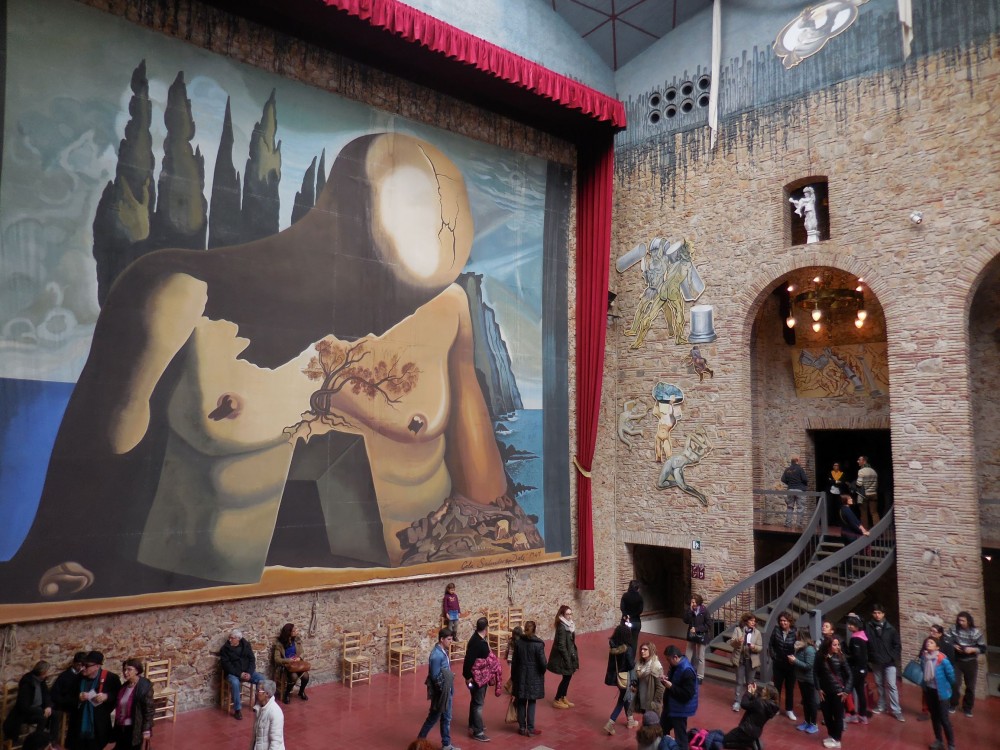 Next, you make your way into the grand hall. The ceiling is a big glass sphere, which lets in loads of natural light. On the main wall is a large, very well-known work of his surrounded by red velvet curtains. I thought it was a nice touch, since Dali liked to consider his museum also a theatre. 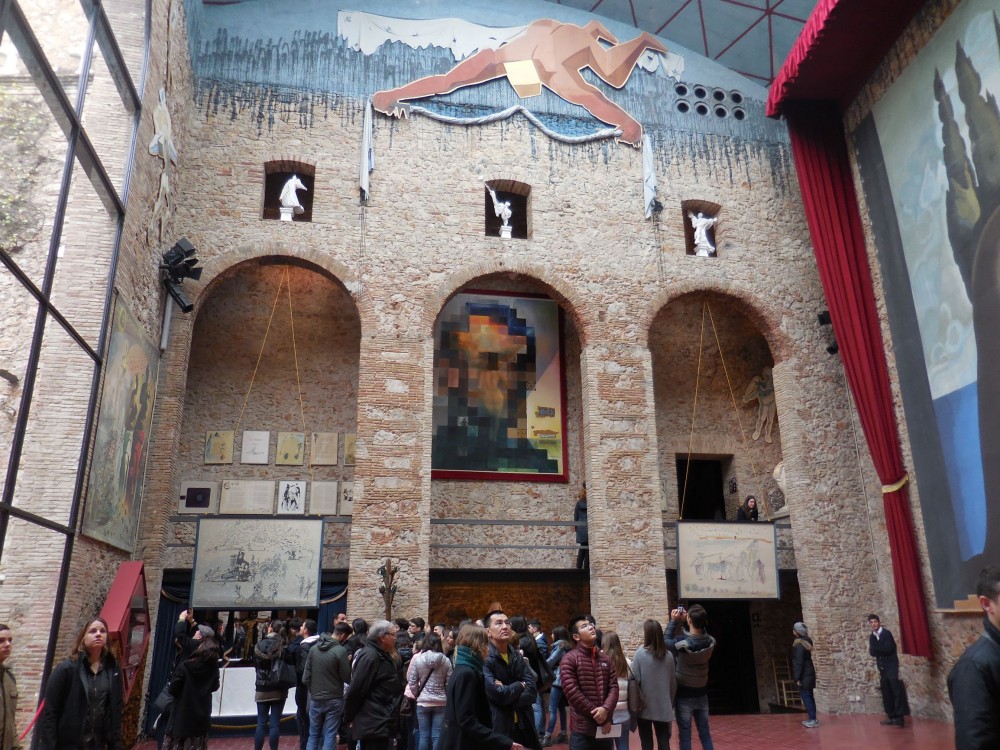 On the left wall is a very famous picture of Lincoln / a naked woman. From far away (and through a camera lens, curiously enough) you can see the blurry face of President Abraham Lincoln. But if you go closer, it seems to be a picture of a naked woman from behind.

Some of his works I am absolutely fascinated by and in love with… others just straight up creep me out. Such as this one, which is basically a piano covered in plaster and a strange half-woman with eyes peering out the back of her head: 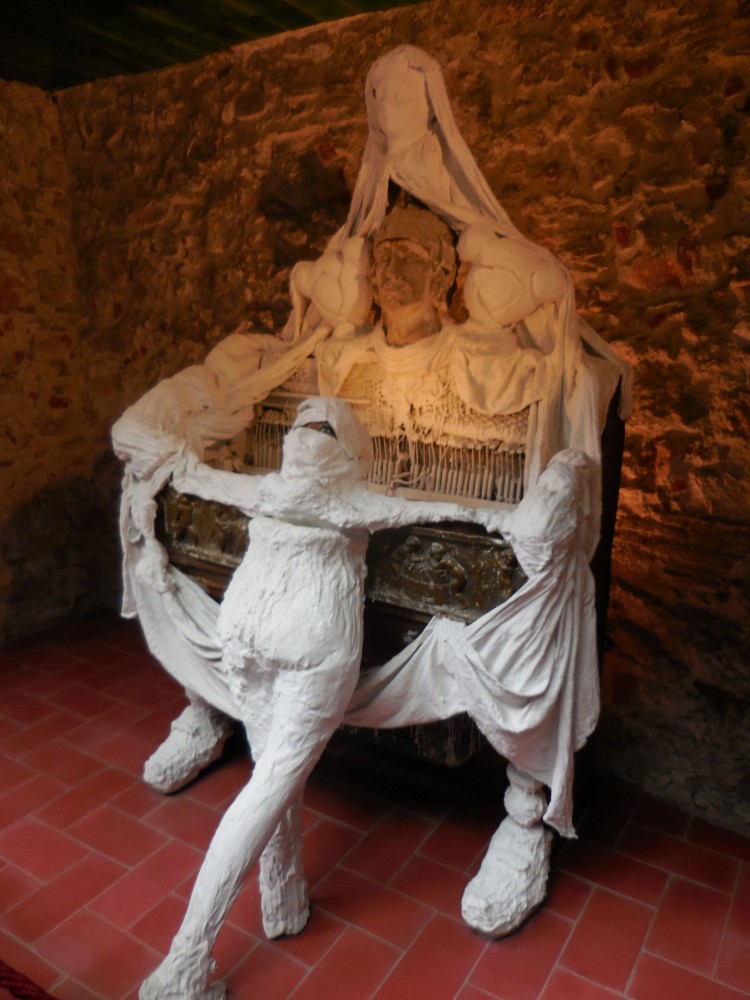 I found it really cool because as we went through, I realized just how little of Dali’s works I was familiar with. He has so many different styles that I had absolutely no idea about, and different points in his life where he begins to use a new technique or theme. Many of these works, if shown to me previously, I would have never guessed were painted by him. 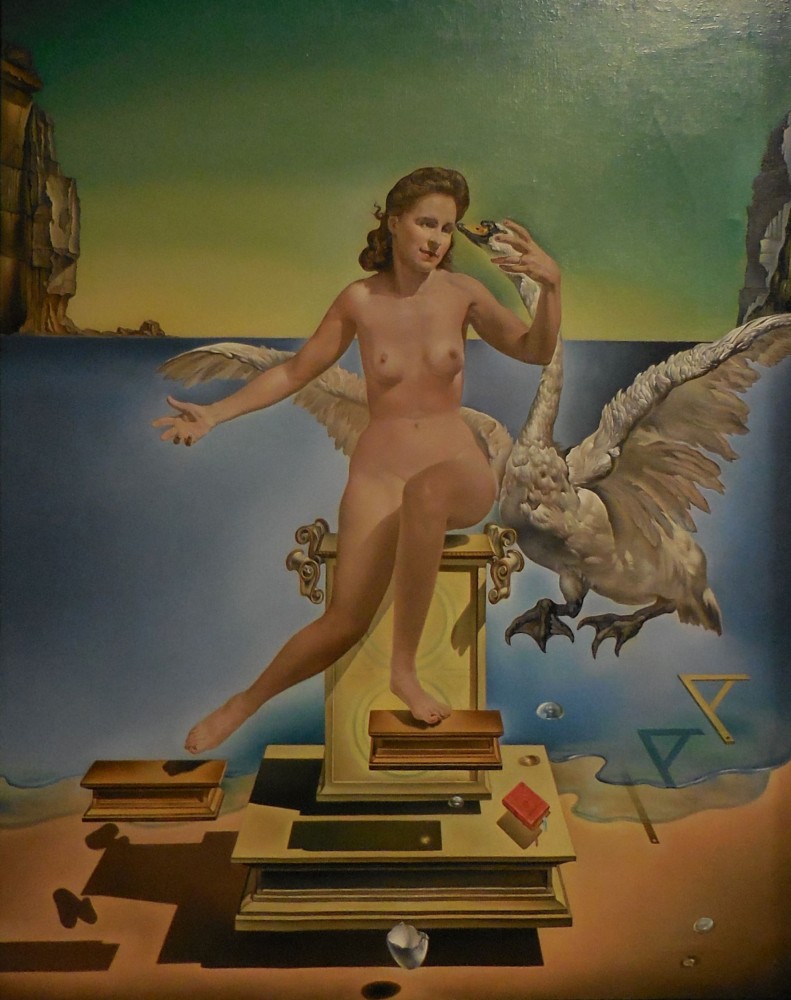 And then you’re transported back to the constant “What the…?” as you walk through the rest of the museum. 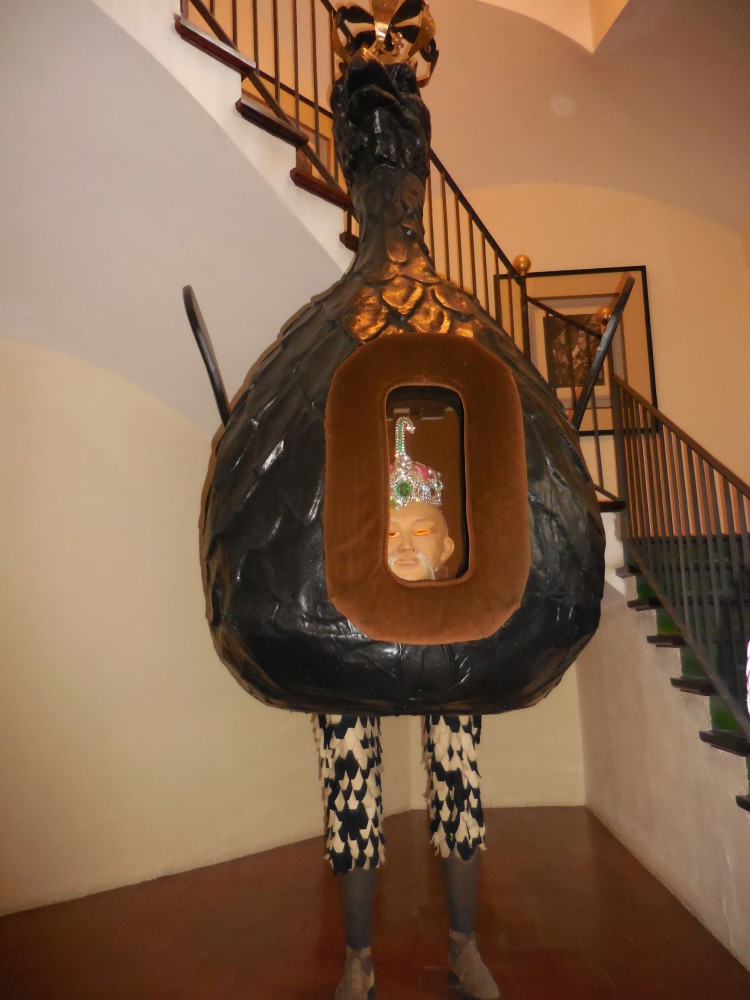 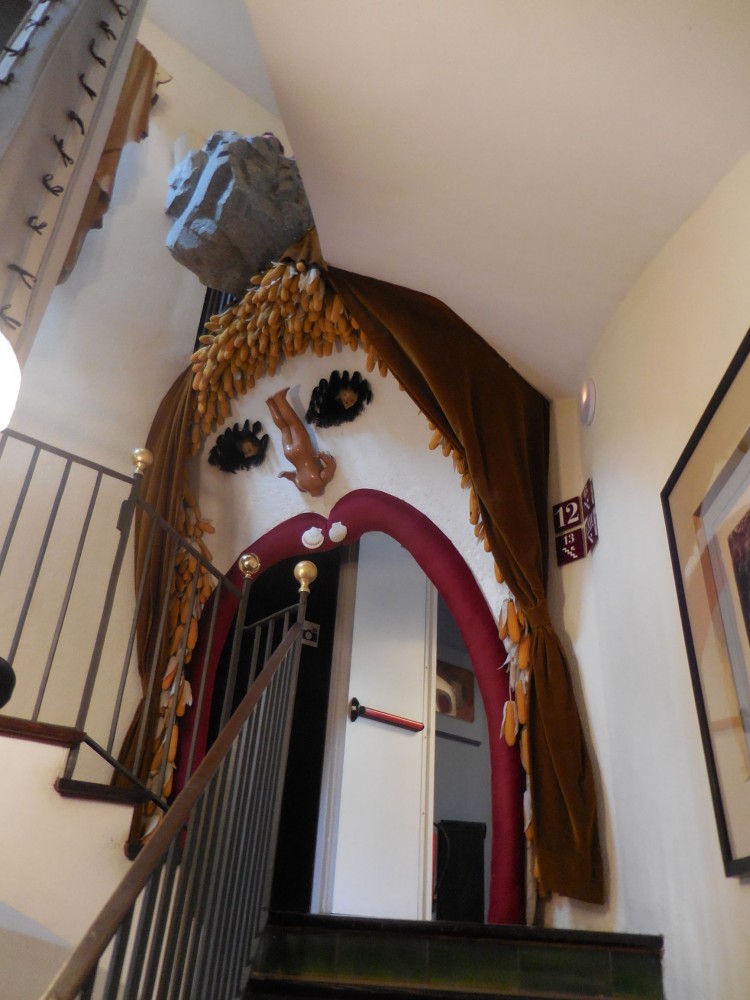 This next painting is a mural on the ceiling… and I could not get over just how gorgeous it was. I would have liked to have a bit more time to admire it and maybe see it up closer in detail, but it really just takes your breath away. It is unlike any other mural you will ever see in your life. 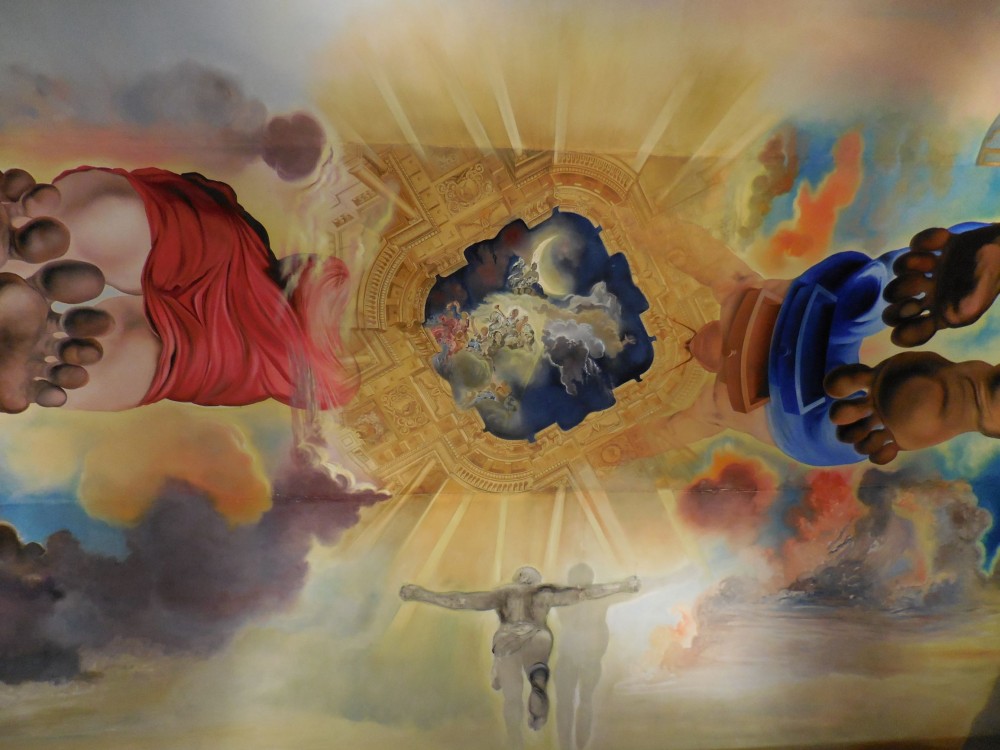 In the same room, I found the first image of his famous melting clocks. Many people expect the museum to be mostly about them, since he’s so famous for it, but if I remember correctly this (and maybe one other image) were the only signs of melting clocks I saw in this museum. I was both impressed and disappointed by this… I would’ve liked to see more, but it was also amazing to see all of the other types of art and crazy ideas he came up with. 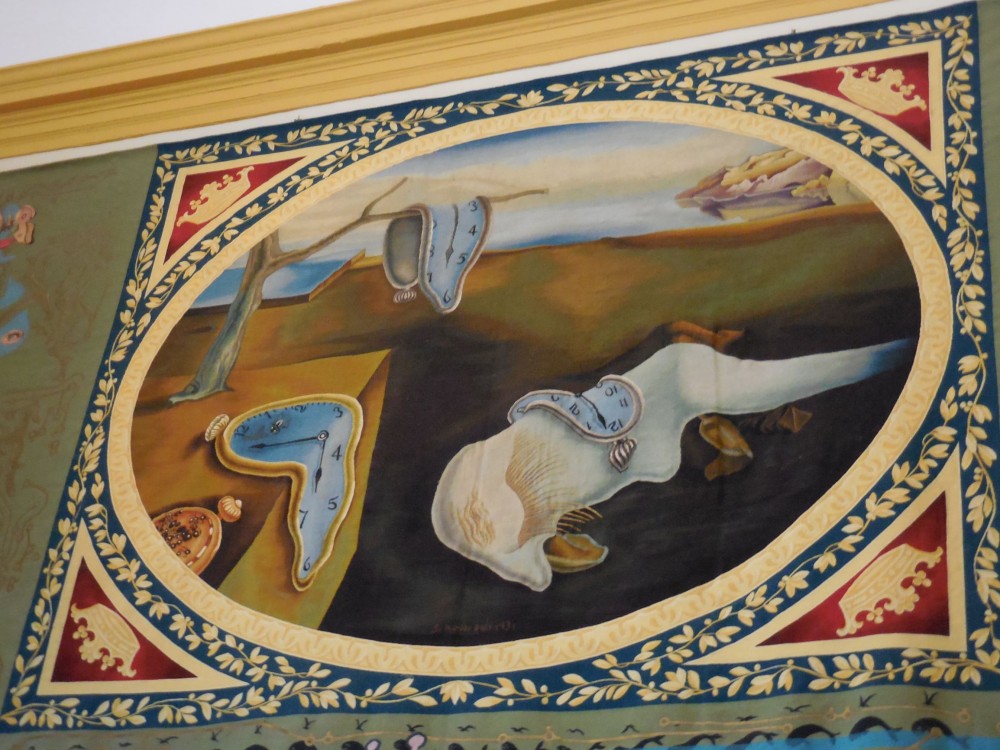 We made our way through all of the rooms until we got to the end… but quickly realized we somehow missed one of the most iconic rooms we had come for. We ran back through it all and waited in line, and it was so worth it. Who thinks up this stuff?

I enjoyed it so much, I didn’t want it to end! But the kids were getting antsy, so we headed out for a well-deserved lunch. Even though it was the weekend, there weren’t too many people walking the streets of Figueres. But it is a cute town nonetheless. I highly recommend coming to visit!

Are you a fan of Dali? Have you been to this museum, or any featuring his work? Let me know what you think in the comments!

This post is proudly a part of the #FarawayFiles & #CityTripping travel communites. To learn more, click below:

A Guide to Barcelona’s Top Neighborhoods

A Guide to Barcelona’s Top Neighborhoods 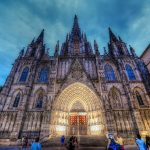 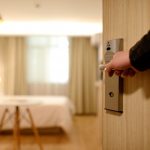 Why You Should Always Try to Book Hotels Directly

I was considering visiting when in Barcelona, but opted out. Now I regret I didn’t. This looks really cool! #farawayfiles

If you’re strapped for time, it can be very difficult to make it all the way up there from Barcelona. I hope you can come back and visit it, it truly is a unique experience 🙂 Thanks for reading!

What an odd museum! I am not one for museums but I do like interesting ones! I would be willing to check it out and learn more about Dali! #FarawayFiles

Yes, it is definitely the strangest (and for that reason, most interesting) museum I have ever been to (and I avoid museums like the plague)! Thanks for reading 🙂

What a great guide to such a unique museum. I saw some Dali works at an exhibition last week and they are so bizarre, cheeky and playful. A definite must do when I’m next in Barcelona. Thanks for sharing on #farawayfiles

Thanks very much 🙂 His works definitely do grab attention!

Just like you, I’m not conversant about all things art but I do appreciate the beautiful things in art including the weird ones haha. So, Salvador Dali is one of the artists whose works I would love to see. I will definitely add the Dali Museum in my list when I travel to Spain some day. His works are truly creative, innovative and some are odd or like, downright creepy! Great pics! #FarawayFiles

When you do visit, let me know what you think! I definitely believe art is personal – if it speaks to you, great, if it doesn’t, also great. Apparently weird things speak to me haha, so it was definitely a fun visit. Thanks so much for reading!

I visited the museum with my teenage kids last summer. I am arty but they aren’t usually into museums. This one was so weird it was fun! #citytripping

I’m glad you had a great time with your kids! Definitely can’t be bored here 🙂

I love this museum. It blew me away. His house on the clifftops is beautiful too, lots more eggs! And the village of Cadaques is a great artists’ colony with plenty of Dali history,

I can’t believe I’ve never visited his house or that village! I’m definitely putting it on my priority list, everything related to Dali is fantastic. Thanks for reading 🙂

What a cool museum! Think my kids would love it! #citytripping

They definitely wouldn’t get bored, that’s for sure! Thanks for reading 🙂

What a fabulous place – I love Dali’s work, and can only imagine the impact of these pieces all together and displayed as he would have liked. Also one of the best artists to show bored teenagers – perfect dose of culture that they’ll actually enjoy!
#CityTripping

I wholeheartedly agree with you! It was incredible seeing all of his varied work together, on display in such a bold way. Thanks for reading 🙂 Hope you can visit someday soon!

Very cool! I can’t say I’m all that educated about art at all, but it looks like there are lots of interesting pieces to see at this museum!

Haha don’t worry, you’re not alone, I’m the same way. But this is one of the few museums I’ve truly enjoyed!